Hidden pearls for high-performance-persistence in Java

Presentation was pre-recorder, but the questions were live.

Why and what: Inside of JVM, for different areas - from embedded, to terabyte-big document storage systems, but scaling and tuning ways of storing data.

You can’t get rid of the persistence layer, but there are three solutions as the beginning of making optimization.

JOOQ: a tool for mapping SQL to Java DSL - SQL style, generated from the DB schema. Allows doing create.select(BOOK.title).from(BOOK).where(...).orderBy(...). Lifecycle: generate Java classes based on SQL schema, can work with it from there. 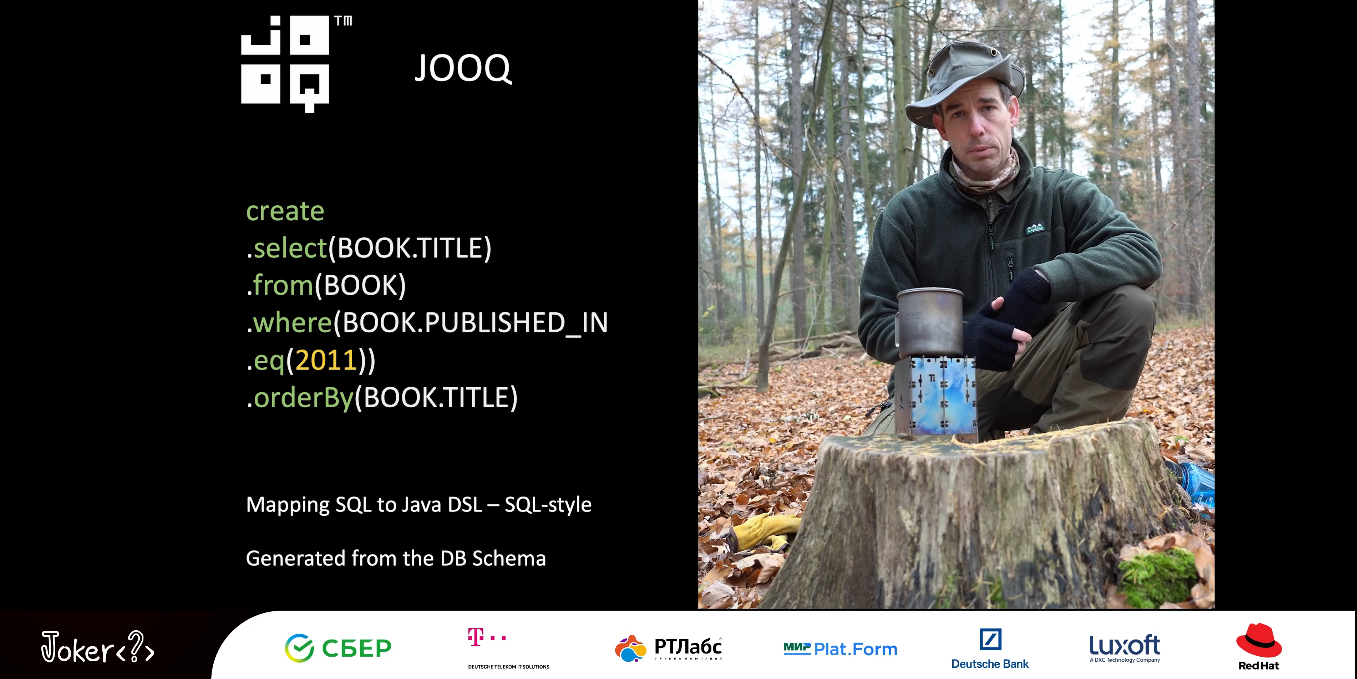 Chronicle Maps: fast JVM key-value store, have to think about serialization for your own. ChronicleMap<LongValue, CharSequence>.

You can create an in-memory map, a on-disk map and combine them (for example, for overflowing). Possible to build cascaded data-structures with different attributes.

Microstream - opensource tool, with custom serialization for objects, not the standart Java one. Good for working with graphs.

Start with EmbeddedstoreManager, define root, store root, call shutdown(). Store model as it is, store collections, can load partial graphs, even cycles are not a problem, no special inheritance.

Advertizes MicroStream hackaton - show exciting use-cases and how MicroStream integrates with any Framework or Library.

Speaker had a lot of experience with TDD development process. “Why write testing code for something, that isn’t created yet?” - you don’t. You write specifications instead, you ask your code “What if we do this? What if we do what?”

On benefits of unit tests and BDD:
“Refactoring without tests is just moving shit around”
If you write tests after writing code - you can’t be sure if they can really break
TDD approach helps with task decomposition

Red-Green-Refactor. Don’t overengineer! Don’t forget to refactor - that’s important! The easier it is to start running tests, the more pleasurable development will be.

(The more manual steps you need to take to run tests - the fewer chances they will be run!)

<Demo - test with lots of actions, the speaker asked what’s wrong with it; experts: too many actions?; speaker: unclear what is being tested, may fail in a lot of different ways, unclear behavior of external api>

What is unit [in Spring app] test? Component? Component + Controller? Several communicating components? Typically it should be a logically isolated block.

Forget about coverage - it’s useless. If all tests being green is enough for you to go to production - assume coverage to be 100%.

Presenter starts with setting up sample db with just id and name for animal table, writes test “Send request, it returns OK”. This forces us to create a controller, add some sort of get mapping.

Proceed by adding first spring component with no code, mocking it, writing GET test;

Do not mock Spring framework components, like Repository or Spring Security - this can lead to green tests and failing environment.

Run E2E tests in as realistic environment as possible!

Novel but practical uses of Java

Presented by Peter Lawrey from OpenHFT.

Extending Stack Trace to track where object was created, and where the object was closed. Report where threads are still running. Was tested in Java 14

(Use resources for long period of time, can’t rely on try-with-resources, have to find own solution. Have background releaser thread - use this for testing. )

DynamicEnum - want to work by name, but have possibility to add new values as well.

Custom IllegalStateException - By adding it into a classpath before system libraries - the compiler now thinks they are checked exceptions. Could be substituted with code analyser.

Lambda friendly ClassValue - associate a piece of data with a class => that data is retired when class is unloaded.

Practical presentation, not some esoteric stuff. No BeanPostProcessros!

Singletons - great as conception, terrible as a pattern. Latest Java-supported solution - write Singleton as enum, can also in static block.

Singleton is an anti-pattern because it forces tight coupling, encourages writing ugly code, can’t be tested without PowerMock, defies Single Responsibility principle (it manages itself and it’s its’ own container).

@ComponentScan => starts scouting defined @Components (including @Service/@Repository/@Controller/@RestController. @Configuration - is a component too!) This works because most Spring mechanisms don’t just search for a specific annotation, but rather analyze each found annotation - what’s a superclass for it, if it’s something that Spring supports?

<Question from expert about @Repository>. Presenter clarifies that you can make your own service, inject it with EntityManager or JdbcConnection, do some work with it, but adding @Repository wraps it up in a layer, that throws standard Spring exceptions that you’ll know how to handle. (Or to test only DB layer)

: Autowiring @Lazy component forces Spring to create that component from the very beginning - Spring wouldn’t know otherwise when you will use it. To solve this issue use @Autowired @Lazy - will inject some proxy that will create component and delegate call only when needed.

Building full context, or only parts of context? Testing parts of the system => (Something breaks, I don’t know why) => Using main conf => All beans are now created, not only related to test scenario.

Injecting custom lists (only this and that, or ensure order)? Use BeanPostProcessor (whoops!), to make a list out of ApplicationContext

More patterns:
Strategy & Command
Never use switch! “What’s 235 switch cases, when you already had 234 cases?” -> “Instead of digging shitty code, write as if you are already a senior dev!”

Registering beans on the fly:

Since Spring 4.3: @Autowired default void regMe(Controller c) {c.register(this.getType, this); } - Spring does not care if it’s a “get/set” or something another method - upon registering this bean (all superclasses of the interface), will call this method as if it was setter, and will pass Controller as parameter.

Don’t use AspectJ for business logic - you will be hated by everyone! You can still use AspectJ on a framework level, for example - to send warning notifications, every time ClassCastException happens.

<I skipped the first part of the presentation, can judge from Twitter comments that I missed a lot of fun>

Tagir is still rather optimistic and sees AI (and IDE tools) development as a future for pair programming - some parts can be done by a robot, some parts - by a human, work together to get results faster.